How Much Can the Gulf Coast Take? Part I: Loss of Land 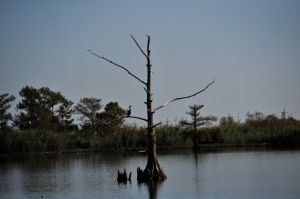 “There’s a tremendous range of human induced and natural induced disruptive events that impact this coast, and yet, it somehow survives,” says Craig Colten, professor in the Department of Geography and Anthropology at Louisiana State University at Baton Rouge. People living on the Gulf Coast know they will encounter natural disasters. Their ancestors have told stories of storms of past generations, and they were awakened to the reality that big storms can happen any time with Hurricane Katrina in 2005. But dramatic loss of land is something they didn’t expect.

Pastor Jesse Morris leads a congregation in the Buras-Triumph area in Plaquemines Parish. He says, on a continual basis, the loss of land is the most devastating of all the disasters and loss they have endured. He tells how people who have lived in the area all their lives react when they go out on a boat and see how the shoreline is receding and subsiding. “They just shake their head  and say ‘It’s gone.  It’s gone.’  In ten years, I don’t know if my grandkids are going to be able to come out here and enjoy this,” he says.  “That is what they see.  It’s just gone.”

Re-engineering of flood plains and wetlands by the U.S. Army Corps of Engineers to accommodate development and industry has caused tremendous disruption of the coastal ecology, according to Colten, author of Perilous Place, Powerful Storms. “They call it the flood plain because it’s created by flooding water, which deposits sediment, which made this such a rich agricultural area,” Colten says. Building levees to prevent flooding sends the water filled with tons of sediment down the Mississippi River and dumps it into the Gulf of Mexico.

This engineered change has interfered with the natural rejuvenation of the land from sediment deposited by the river. “Because it’s no longer rejuvenated on a regular basis, the delta is sinking under it’s own weight. And because it’s no longer getting fresh sediment to rebuild itself, it’s sinking faster than it’s growing,” Colten says. It has been discovered in recent years that drilling for fossil fuel in these low-lying areas also contributes to subsidence.

The ancestors of Thomas Dardar, chief of the United Houma Indian Nation, have lived in the area of Houma, Louisiana for 300 years. To illustrate how rapidly the land is eroding and subsiding, Chief Dardar shows aerial photographs of the progressive loss of land. Each picture in the series of photos he displays from his computer shows less land, more water, fewer homes.

He says when he was a kid the places he hunted rabbit and deer are now all water. “We lose a football field every 30 minutes,” he says. “Now, we’re catching red fish, speckled trout, drums, flounders. So, the big travesty is that the land that we once hunted on, now we fish on.”

Pastor Jesse considers the sediment the Mississippi River carries as it flows toward the Gulf of Mexico a gift from God. He says he understands the need to dredge the river for navigation, but he doesn’t understand why the U.S. Army Corps of Engineers doesn’t put the sediment back to help rebuild the delta rather than dumping it into the sea. “The Corps of Engineer ships and the companies that they hire, they capture all the silt and put it off the coast and dump it in thousands of feet of water, when we can just access it by dredging and pump it and keep our Gulf Coast,” he says.  “We can keep it pristine. We can keep it fresh, and I’ve been saying this for as long as I can remember.”

Colten says there are efforts to try and restore the Gulf Coast, but there are competing interests for what to do with the sediment. He says the Corps of Engineers want the sediment to continue to go out into the gulf. “They want the river to flow and scour itself as best it can so they don’t have to spend as much money on dredging,” he says. “I think gradually the coast is going to continue to retreat, and I think with sea levels rising, it forces that.”

Chief Dardar says he wonders what will be left for future generations. “I’m 56 years old, and when you look at my lifetime, as much land that we have lost, and you start putting that into perspective, I have grandchildren: What is going to be left in the next 50 year for those guys to look at and treasure and remember, you know.”

Another long-term disruption in coastal ecology occurred in the 1970‘s to make it easier for oil companies to bring in equipment for on-shore drilling. The Corps built canals through the wetlands to allow big barges to carry the equipment. “So, you have this vast network of canals that have been constructed that allows saltwater intrusions, which kills the vegetation. It disrupts the habitat of the shrimp, and the other fish that use the estuaries as a nursery.  It affects the salinity of the oysters absolutely as well,” Colten says. In Part II of “How Much Can the Gulf Coast Take?” we’ll explore how this disruption along with powerful storms and the BP Deep Horizon drilling disaster are affecting the fishers and costal communities who depend on this ecosystem for their livelihood and sustenance.